For fans of barista-quality drinks, having a milk frother at home is a dream. However, many tend to shy away from milk frothers, thinking that they are too expensive. Fortunately, there are brands which offer cheap yet powerful milk frothers and one of them is the Vremi Milk Frother.

You can have your own café-styled beverages at own home with the Vremi Handheld Milk Frother Wand - Battery Operated Coffee Frother and Foam Maker with Steel Whisk for Italian Cappuccino or Latte - Electric Hand Whisk for Egg Whites Mini Smoothie Blender - Black. This handheld milk frother will help you make lattes, cappuccinos and other drinks in just a few minutes. Here is the list of features of the Vremi Milk Frother that you should check out. 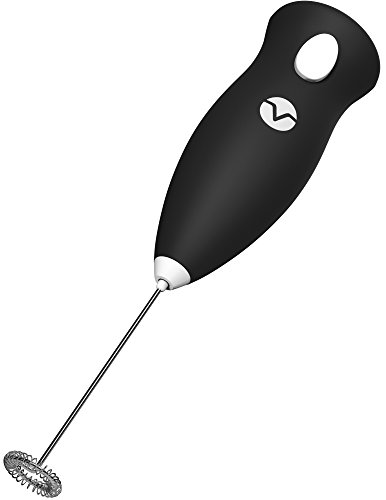 For a handheld milk frother, the Vremi Milk Frother is not bad in terms of the features it has, although it doesn’t show up on our best milk frother list for 2019. However, does it do what it promises? Check out the reviews from users regarding this milk frother and learn whether this milk frother can make your favorite drinks like it should.

Many users expressed their love for this milk frother and pointed out why the Vremi Milk Frother should be considered by prospective buyers. Customers like the fact this milk frother comes with everything you need from the moment it is taken out of the box (except the batteries). It is also very light and easy to use.

The frothing capacity is also a big plus for some users and they also say it can froth in as fast as 30 seconds. Some users have also said that they like the fact you do not have to keep holding down the power button just to get it to froth like other brands.

You simply have to press to turn it on, then let it froth on its own; then turn it off with the same button. The froth made by this frother is also very good and the consistency is great. It can also work with any type of milk you want to turn into milk froth.

Some users have also loved the versatility of this milk frother because they were able to use it to scramble eggs and make other mixtures that required a regular whisk. Cleaning this milk frother up is also very easy according to users as they only need to pop the top off and then wash it.

Several users have expressed their disappointment when it came to the Vremi Milk Frother. They say that this milk frother is not very durable and stopped working after a few days, even if it had  not been dropped in any way. Even if the batteries were replaced, the machine did not work according to one user.

Users also say that the milk frother is not made well because some parts, like the batteries, tend to become unseated from their place and would affect the performance of the machine. One even reported the wand tends to fall off every single time it is used.

The froth was also a sticking point for some users as they say the froth it makes was not long lasting and not as consistent as that from other milk frothers.

There were also other customers who reported that they had to make separate servings for multiple cups with this milk frother, which was quite a hassle as it was time consuming. It also did not come with any directions on how you can set up and maximize your use of the milk frother.

Buying a milk frother doesn’t have to require a big bulky machine that you can’t fit in your kitchen. With the Vremi Handheld Milk Frother Wand - Battery Operated Coffee Frother and Foam Maker with Steel Whisk for Italian Cappuccino or Latte - Electric Hand Whisk for Egg Whites Mini Smoothie Blender - Black, you can easily enjoy your favorite drinks at home and keep it safely anywhere since this does not take up too much space.