Nothing quite beats freshly ground coffee.

Electric grinders are quick, convenient, and are far more user-friendly and convenient than their manual predecessors. The Cuisinart DBM-8 supreme is suspiciously cheap compared to its competitors, and most of the time, low cost may also equal low quality.

Yet the DBM-8 supreme is so well-rated that we’re curious to find out more. So today we’re going to delve deep into this product and see what all of the fuss is about.

We’ll be reviewing the specifics of this product and exposing the good, the bad, and the ugly, and, most importantly, we’ll be letting you know whether the DBM-8 provides good bang for your buck.

What is a burr mill?

The Cuisinart DBM-8 supreme is a burr mill.

Whereas a blade grinder has a blade in the center of the grinder similar to a blender, a burr grinder is instead made up of two revolving abrasive surfaces (called burrs), and the coffee is ground up in between these two surfaces.

Burr grinders are best for grinding the beans to a uniform size, which gives you more control over the grind. They’re also well-suited to anyone preparing French press or pour-over coffee.

Who is it for?

The Cuisinart DBM-8 supreme coffee grinder is perfect for those who are new to grinding their own coffee beans. It’s super easy to use, takes up minimal space, and has a clean, attractive design.

It’s also great for anybody who is looking for something more budget-friendly, as it comes in at a fraction of the cost of its competitors, and is frequently promoted on Amazon too, so you may bag it for an even better price.

This grinder has ceramic block burrs and has an impressive 18-position grind selector which ranges from ultra-fine to extra-coarse.

However, one thing we’d point out is the noise that this grinder makes – it’s not ideal, particularly before you’ve had your morning caffeine fix.

The DBM-8 has a built-in safety feature that makes sure the grinder won’t start until the bean hopper and the ground bin are locked in place.

The plastic grind chamber is great for temporarily storing your ground beans but it isn’t airtight, so you’re best to transfer it into a more appropriate jar for long-term storage.

Measuring 6.00 L x 7.13 W x 10.75 H inches and weighing 4.5 pounds, the DBM-8 won’t take up much countertop space, making it ideal for anyone who is living in a small apartment and has limited storage space. It’s also light enough to transport if necessary.

The DBM-8 isn’t the most fanciful piece of kit on the market but it has a design that is clean and simple: crafted from black plastic and stainless steel, allowing it to seamlessly fit into most kitchens.

There’s also a cream version which is slightly more expensive. 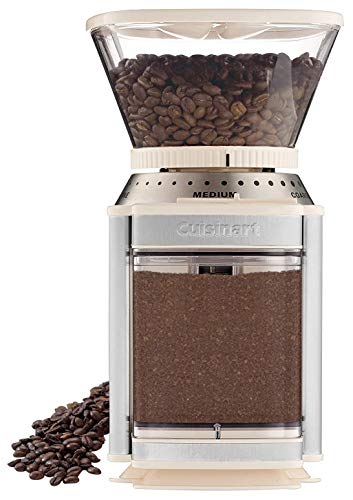 As we said earlier on, the DBM-8 offers an impressive 18 grind types to choose from, and these range from “fine” to “coarse.”

One thing we’d highlight is that while Cuisinart claims the DBM-8 can grind fine enough for espresso, the quality isn’t really up to the standards of your local coffee house, and it’ll only really be effective if you’re using a pressurized portafilter.

We also mentioned earlier that Burr mills are best for French press coffee, which requires a coarser ground. We found the grind pretty inconsistent with the DBM-8, so occasionally you might end up with a thick sludge when attempting to make Fresh Press coffee, as it’s very hit and miss.

Ultimately, the consistency of your grind will depend on the type of beans you’re using as well as the grind settings.

The key selling point of the DBM-8 is that it provides freshly ground coffee that is easy to make and accessible to everyone.

For those who are less fussed on the science of the coffee (extraction rate, brewing temperature, etc) it’ll make a more than decent cup of joe. The other thing is that Burr grinders still provide better results than blade grinders.

Cuisinart claims that this machine can grind enough for 12 cups of coffee in approximately 40 seconds, and 18 cups in 55 seconds, however, we’d also say that grinding time can be inconsistent (as is the case with most grinders), as grinding time depends on factors such as the grind type, the kind of coffee you’re making, and which beans you use.

We’d definitely say that the DBM-8 is a beginner’s grinder as it’s straightforward and simple to use. All you need to do is plug it in, load your beans into the hopper, and lock the grounds bin into place.

Then select your desired grind setting by twisting the hopper and select the number of cups to grind for (from 4 to 18).

Bear in mind that the cup-selector is just a timed grinding switch, so if you want to grind just enough for one cup you can simply push the cup selector switch to “off.” Once you’ve chosen your settings, simply hit the start button.

The DBM-8 has a removable hopper to make cleaning easier, and the top burr is attached to the base of the hopper and comes out with it, which allows you to clean off the coffee residue from the bottom burr.

One thing to bear in mind with the DBM-8 design is that because the burr grinder is all-plastic it’s prone to static, which means that the coffee dust tends to stick to the coffee dispensing chute and the top of the grounds bin.

Because of this, it’s pretty easy to get coffee particles all over you and your counter.

The low price point of the DBM-8 means that realistically, it’s not going to last forever. At best, and with regular cleaning, you can expect this grinder to last for a couple of years, and after this point, it’s probably far cheaper to replace it rather than attempt to fix it.

This is why it’s ideal for those who are new to coffee grinding or anyone who wants this grinder for occasional use. If you’re looking for something more durable, we’d suggest spending a little bit more on something more robust and reliable.

The Cuisinart DBM-8 supreme grind is a product with many benefits. This burr grinder is budget-friendly and extremely easy to use, making it a great option for first-time grinders or anyone who is looking to save money.

The design has minimal frills and is sleek and functional, with an 18-position grind selector ranging from very fine to very coarse.

Considering the DMB-8 is a fraction of the cost of its competitors, it certainly isn’t the most durable or the highest performing grinder on the market and this is to be expected.