Nothing can replace sleep, but coffee can do it best. I love coffee – Kelley O’Hara

Someone once told us that the world has always been crazy and that it’s always moved at a frantic pace that’s nearly impossible to keep up with.

While that’s probably true, it feels like things have started to get faster and faster and that we have less time for ourselves with every passing year, as work and a hundred different personal obligations fill up every available minute of every single day.

And with next to no time available to us, it means that we have less time to enjoy all of the little pleasures that we used to take for granted, like a great cup of coffee first thing in the morning and when we finally made it home after a hard day at the office.

It was trying to find the time to make that cup of outstanding java that nearly drove us out of our minds. Having been devoted to all of the inherent magic of the coffee bean since our senior year in high school, the thought of having to go without it wasn’t just scary, it was terrifying.

Sure, we could grab a cup from our nearest coffee shop on the way to, and home from, the office, but it just wouldn’t have been the same.

We’d grown used to enjoying our coffee in the comfort of our own home and with less and less time available to us, it was looking increasingly likely that it was going to be another of life’s joys that we’d have to consign to the trash heap of history if we couldn’t find a solution to the increasingly desperate situation.

Then, as if by magic, a miracle happened. We discovered the world of single-serve coffee brewers and makers and knowing that we could continue to enjoy coffee the way we always had, made the sun shine a little brighter and all of the colors of the rainbow seem more vibrant.

But the trouble with leaping feet first into single servedom was that the more time we spent using the coffee makers, the more we expected from them, and when most of them failed to live up to our admittedly high expectations, we slowly started to become more and more disillusioned with them and coffee.

And that’s when we bumped headlong into the Cuisinart SS-10, and our coffee world was turned upside down.

No, you didn’t make a mistake, we did say Cuisinart.

While they’re a brand that’s probably more familiar to your parents, and they’re not a name that regularly pops in the not so muted coffee conversations that hipsters have in their favorite bars, it shouldn’t really be a surprise that Cuisinart makes the sort of coffee machines that are designed to give you a full-throttle, caffeine injection and shake the pillars of the java home brewing universe.

After all, they’ve been equipping America’s kitchens for half a century, so it’s only logical that at some point in that half-century journey, they turned their attention to coffee. 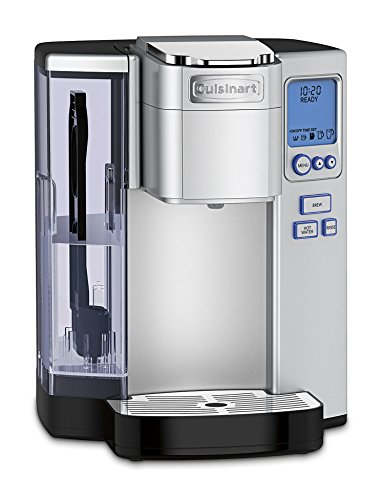 With a name that sounds like it rolled off the production line in Detroit in nineteen sixty-eight, the SS-10 is the single-serve world’s equivalent of a V8-powered muscle car.

Able to brew five different sizes of coffee (a four, six, eight, ten, or twelve-ounce cup) with the touch of a button, it charged straight off the line and made an instant impact.

And it wasn’t just the five different sizes of coffee that it can brew when most single-serve machines can only manage three at most that made an instant impact with us, as the Cuisinart is also packing more simple to use and easy to understand technology than a computer convention.

The fact that it’s fully programmable was a revelation, as it meant that we could program the SS-10 to not only make the size of coffee that we needed to kick start our day but that it would be ready when we wanted it to be ready.

It might not sound like a big deal, but when you stagger into the kitchen, bleary-eyed and desperately trying to prepare yourself for another day behind your desk in the morning, just knowing that your coffee will be ready is one of those little blessings that you need to count, rather than ignore.

And it was just another of the features that instantly endeared the SS-10 to us.

Most single-serve coffee machines are designed to work solely with K-Cup pods, and while we appreciate the world of flavor that’s available thanks to the fact that there are nearly four hundred different varieties of K-Cup available when we became part of the single-serve world, we started to miss freshly brewed filter coffee.

So, finding out that the SS-10 can brew using BOTH K-Cup pods and filter coffee was a game-changer.

The SS-10 comes with its own HomeBarista reusable filter cup that’s easy to clean and even simpler to use. Just fill it with fresh coffee and insert it into the same slot that the K-Cup pod uses (just remove the single-serve adapter first), fill the reservoir, set the temperature that you want the SS-10 to use to make your coffee, hit the button and it’ll kick into high gear and thanks to its fast brew feature, you’ll have a fresh cup of coffee in your hand in less than a minute.

That’s right, we did say that you can control the temperature that the SS-10 can, and will brew your coffee at.

Granted, the range isn’t huge, but it’s big enough to make a difference and that’s all that matters when you want to grab a quick cup of coffee before rushing out the door because you’re late for work.

The fast brew technology, or whatever term Cuisinart is using to describe it this week, means that the SS-10 doesn’t need any time to heat up, and as soon as you’re ready and hit the brew button, that’s exactly what it does.

It gets on with brewing, which is why you end up with a delicious cup of coffee in your hands less than a minute after you push the button.

The Dreaded Clean Up

Regardless of what anyone might say to the contrary, no-one likes having to clean their coffee maker. Sure, the coffee is great, but actually cleaning the machine afterward?

That’s always been one of our personal bugbears, but guess what? That’s right, the SS-10 makes it simple and straightforward. As long as there’s water in the tank, just put a cup under the dispenser, hit the ‘Rinse’ button, and the Cuisinart does the rest.

A single-serve coffee machine that cleans itself? It was literally like the entire pantheon of caffeine deities heard our collective coffee prayers and sent the blueprints for the SS-10 to Cuisinart’s engineers while they were safely wrapped in the land of dreams.

Somebody at Cuisinart was keeping their eye on the ball when they approved the design for the SS-10, as fitting it with a seventy-two-ounce reservoir means that you only need to top up the reservoir after it’s brewed six cups of coffee.

So if you do forget to fill it up every now and then, you’ll still be good to go and it’ll keep on making all of the coffee that you need, and want, it too.

And while we’re on the subject of things that you might not remember to do, if you forget to switch it off before heading off to work, don’t worry.

You won’t need to spend the day fretting and worrying about an overheating coffee turning your home and everything in it into a funeral pyre, as it’ll switch itself off thirty minutes after it’s finished brewing.

And Now For The Bad News

We tried to find something that we didn’t like about the SS-10 we really did, and the only thing that we could come up with was one of the things that we like about it, the size of the reservoir.

Even though it makes brewing coffee even easier, as you don’t need to keep filling it up between brews, the sheer size of the reservoir and all of the features that are crammed into the machine means that the SS-10 is a lot bigger than most single-serve coffee brewers.

It isn’t really an issue that most people will ever have to think about or consider when looking for a single-serve machine, as it’ll just sit on their kitchen counter in the same spot making cup after cup of coffee, year after year.

But if space on your countertops is at a premium, or you’re looking for a single-serve machine that’s as portable as it is versatile, then the SS-10’s size might be slightly problematic.

We had to struggle to find something that we didn’t like about the SS-10, as it ticked every single-serve coffee box that we needed it to and a few more that we didn’t even know that we wanted, or needed, it too.

After a week of using the SS-10, we were forced to come to a shocking, and somewhat startling conclusion. That it was, and is, the single-serve coffee machine that we’ve been searching for, and now that we’ve grown used to it, we’ll never look at another single-serve machine ever again. 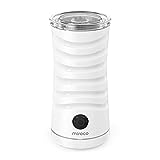 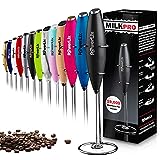